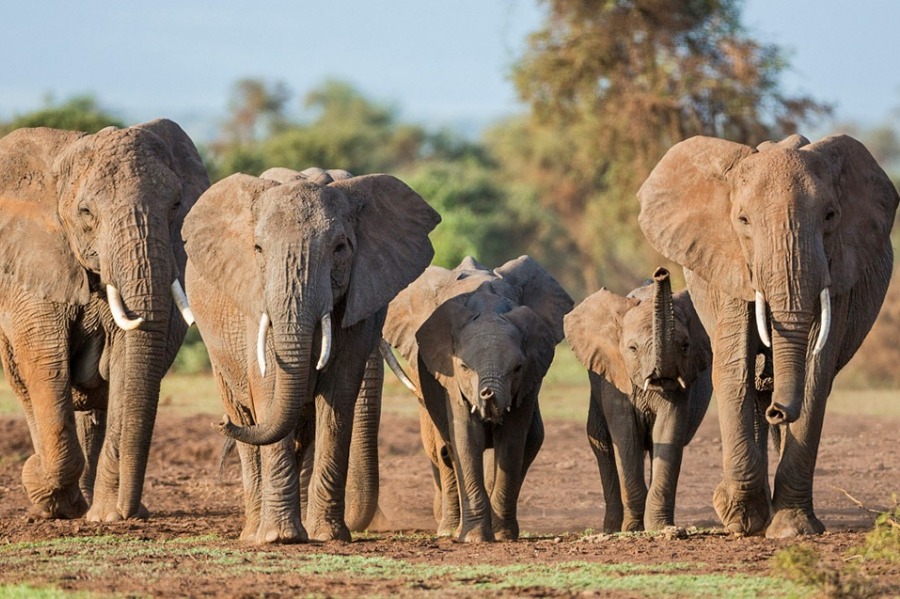 For guests looking to experience the best parks of Kenya this is the perfect journey for them. They start at elephant-haven Amboseli National Park, then onto Lewa Downs before ending at the wildlife packed Masai Mara National Reserve.

Amboseli Lewa Conservancy Masai Mara Game Reserve Price: From $5,590 per person   NOTE: All prices are in US Dollars per person based on double occupancy accommodations unless otherwise stated. 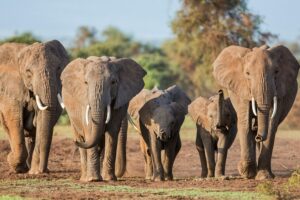 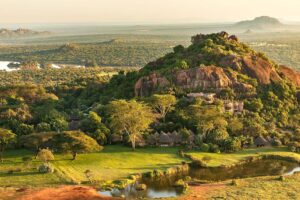 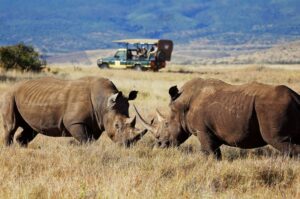 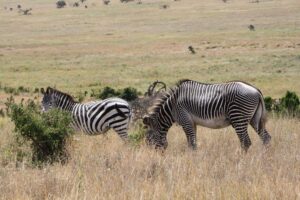 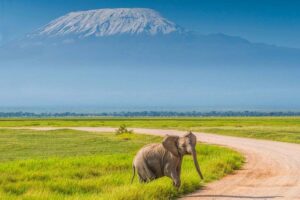 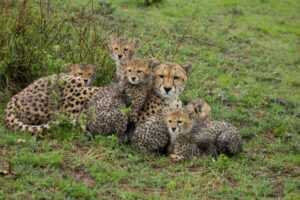 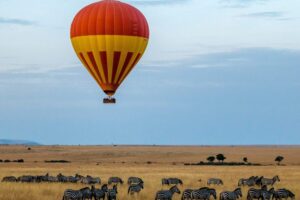 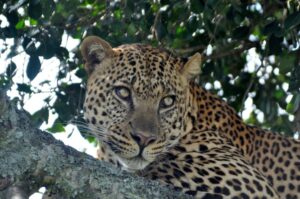 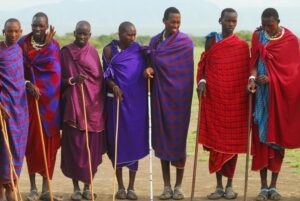 Arrive at Jomo Kenyatta International Airport, clear immigration procedures, meet your representative who transfers you to your Nairobi hotel. Nairobi is the largest city between Cairo and Johannesburg. Though just south of the equator, it enjoys a spring-like climate. It is a modern city, yet its main avenues blaze with color from tropical bushes and vines. Less than 100 years ago, there was a river in an empty wilderness where Nairobi now stands. Nairobi has a wealth of international restaurants with worldwide cuisine available including Ethiopian. French, Italian and Chinese. Several restaurants also offer local, Swahili favorites. Shopping in Nairobi varies from African clothing and craft shops to bazaar stalls and open-air markets where souvenir hunters find bargains ranging from woodcarvings to Persian carpets. There is also a thriving gemstone and tailormade jewelry industry in Nairobi offering rare and unusual local and regional stones.

After an early breakfast drive to Amboseli National Park. Arrive in time for lunch and an afternoon game drive.

Amboseli National Park, at the foot of Africa's highest mountain 5895m (19,340ft), Kilimanjaro is one of the most popular of all Kenya's national parks. It lies some 240 kilometers (145 miles) south-east of Nairobi. The snow-capped peak of Mount Kilimanjaro rising above a saucer of clouds dominates every aspect of Amboseli National Park which covers 392 square kilometers (151 square miles). The Tanzania border runs along its base and forms the boundary of the park. Years ago, this was the locale around which such famous writers as Ernest Hemingway and Robert Ruark spun their stories of big-game hunting in the African wilds.

The snows of Kilimanjaro, white and crystalline, also form a backdrop to one of Kenya's most spectacular displays of wildlife - lion, elephant, leopard, rhino, cheetah, buffalo and a host of plains game and the combination makes the park a photographer's paradise. Part of the park is composed of a dried-up lakebed which in the shimmering heat produces mirages. Swamps and springs, fed by underground rivers from Kilimanjaro's melting snows, form permanent watering places for the wildlife in times of drought.

As the sun creeps above the horizon set out on your first game drive of the day. This is the best time to see Mount Kilimanjaro in all her glory and capture that iconic image of the elephants in front of the world tallest freestanding mountain. In the afternoon you have time for a siesta before setting out again in the golden light of sunset on a second game dive.

Transfer to the airstrip for the flight to Nairobi at 09:00am connecting onto Lewa Wildlife Conservancy at 10:20am approximately. Lewa was one of Kenya’s first private conservancies and is the best place to see black rhino in East Africa. Arrive in time for lunch and an afternoon game drive.

Lewa Wildlife Conservancy is a family owned 60,000-acre game reserve and UNESCO World Heritage Site located in the foothills of Mt. Kenya, this premier wildlife haven has been the home of the Craig family since 1924. Although just 48 kilometers (30 miles) north of the equator, it is home to animal species not seen in the southern hemisphere, including reticulated giraffe, the endangered Grevy's zebra and blue-skinned Somali ostrich. Black and white rhino, introduced here in the early eighties in an effort to provide a haven, thrive here and are relocated to other parks in Kenya.

All three of the big cats, up to 200 elephants, Greater kudu and the graceful gerenuk antelope with its long, elegant neck, are part of the unique experience that is Lewa. Lewa is a world leader, a pioneer in conservation and has won many awards for its efforts. It leads the way in community-based initiatives. As an activity-based reserve, it offers unique bush experiences that are restricted in national parks: you can ride on horseback alongside herds of giraffe, zebra and antelope, take a night game drive, walk with armed rangers, or enjoy a camel ride to a bush breakfast. Several springs bubble up and feed the reserve's perennial water supply supporting the game and ensuring wildlife sightings year-round - including rare sitatunga antelope which, with their splayed hooves, are swamp residents.

Head out on a morning nature walk and a afternoon game drive. You have the option to explore Lewa on horse or camel back which is best way to get close up with the wildlife. On horseback humans become just another animal and blend in with the wildlife. This allows you to ride alongside a heard of zebra or giraffe and experience the thrill of running free. Rides can be adjusted to suit a variety of levels.

For those that would like to venture further afield you can also book a helicopter excursion. There are several different half day and full day trips for you to indulge in including flying up Mt Kenya with a picnic breakfast for a spot of fly fishing, up into Northern Frontier and view Lake Turkana, interact with the little-known Pokot tribe and fly over the extraordinary Suguta Valley or fly up to Magado Crater where pools of saline water captures the colours of the rainbow.

Transfer to the airstrip for the flight to the Masai Mara at 09:35am approximately. Arrive in time for lunch and an afternoon game drive. The jewel in Africa's crown, Masai Mara is host to the most spectacular array of wildlife. Her 1,510 square kilometers (583 square miles) of open savannah, woodlands and tree-lined rivers create an eco-system which supports huge numbers of bird and mammal species. Lion are found in abundance throughout the park as are elephant, giraffe, a variety of gazelle species and zebra. Cheetah and leopard are also regularly seen and, if lucky, you may also find rhino.

Game viewing is never dull in the Mara, and patience is often rewarded with unique sightings: a pride of lion stalking their prey; a solitary leopard retrieving its kill from the high branches of an acacia tree; male wildebeest sparring to attract females into their harem; or even a herd of elephant protecting their young from opportunistic predators. The annual wildebeest migration traditionally is present in the Mara from July-September and at this time nature's dramas unfold before your very eyes at every turn.

Morning game drive in the full splendour of one of the world’s most densely populated wildlife area - the famed Masai Mara. In the afternoon you have the option to visit a Masai Village, a fascinating cultural experience. We highly recommended an early morning balloon flight over the Mara plains with Champagne breakfast (additional cost).

The colourful and vibrant Maasai people are one of the few communities in Kenya to retain their culture and traditions. You are welcomed into the village with a traditional dance followed by a guided tour by the chief. He also gives a brief talk to the group about the lifestyle of the Maasai people. You are then introduced to some of the families and invited into their homes where you have the unique opportunity to see how they live.

As the balloon is inflated against the first rays of sunrise your pilot goes through safety procedures. Once aloft, the balloon floats gently over the plains, giving a bird's eye view of the game below as the sun creeps slowly over the horizon. After about one hour the balloon lands as breakfast is being prepared and, of course, enjoy a glass or two of bubbly to toast your flight in a tradition initiated by the Montgolfier brothers.

Day 9 - Fly to Nairobi and Depart

Fly back to Nairobi at 11:00am and have lunch. After lunch there is some time to do some shopping in the city before being transferred to Jomo Kenyatta International Airport for the onward flight.

If you would like to continue your journey onto the beach please see our Kenya Coast Extension.